Masked Antifa terrorists rioted at Berkeley university in response to a planned speaking event by Milo Yiannopoulos. Milo’s speaking event was cancelled due tot he riots.  Innocent people were attacked with poles by Antifa, one is believe to be critically injured, possibly dead. Antifa also burned dumpster and a tree.

backup copy of footage, because this event is being covered up. Antifa terrorists threatened people who were filming and demanded people deleted footage and stop steaming the event.

This man was beaten by Antifa and may have died from his injuries.

Inside Antifa there seems to be a strong racial motivation for attacks.

President Trump, disgusted by the incident has threatened to withdraw federal funding. 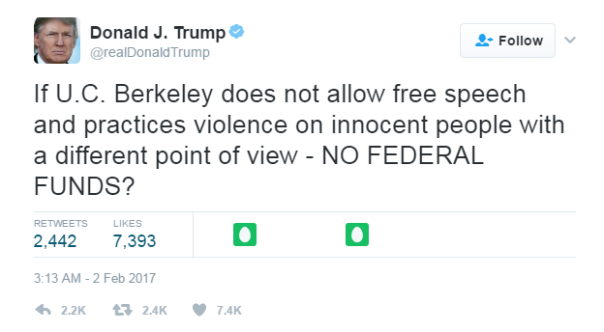 A great welcome from the religion of peace.

The puppets are fighting again.

It really goes to show the circus politics descends into. The system is based on two things that you will see again and again;

1) it is based on violence

2) the rules don’t apply to the rulers and their puppets.

Look at how they behave. Honestly you can make this stuff up.

This is your ‘democracy’ in action.

Ryde mayor Bill Pickering has been knocked unconscious and taken to hospital after tensions erupted at a polling booth for a council byelection on Saturday.

Cr Pickering was handing out ham sandwiches at Putney Public School when he was allegedly confronted by independent candidate Vic Tagg, according to deputy mayor Roy Maggio, who witnessed the incident.

Cr Maggio described the punch as a “king hit” which caused Cr Pickering to fall backwards into a garden bed, at which point he began to have a seizure.

Voting was under way at the time for the East Ward byelection, which was triggered by the resignation in December of former mayor Ivan Petch, who was found by ICAC to have engaged in corrupt conduct.
It is understood Mr Tagg, who is a former mayor of Ryde and former-Liberal councillor, had been talking to voters at the booth and describing the Liberal party as “corrupt” before he allegedly approached Cr Pickering and punched him in the jaw.

Both Cr Pickering and Cr Maggio are members of the Liberal Party. Mr Tagg is currently the president of the Chamber of Commerce and chairman of Ryde-Hunters Hill Life Education. He unsuccessfully ran as an independent candidate for the East Ward in the 2012 Ryde City Council elections.
Independent candidate Vic Tagg.

Police and ambulance were called to the scene and Cr Pickering, 52, was taken to Ryde Hospital.

He is in a stable condition in hospital, where he has been put in a neckbrace and is awaiting the results of scans to determine the extent of his injuries, according to a person close to Cr Pickering who did not wish to be named.

Cr Pickering has also given a statement to police from his hospital bed.

Mr Tagg allegedly left the school after the incident and could not be contacted on Saturday afternoon.

Cr Maggio said a “sombre” mood descended on the polling booth after the incident, and that most of the other candidates left the site soon after.

Police are investigating the matter and ask anyone with information that has not already spoken to police to come forward.

Mr Petch, who was suspended by Local Government Minister Paul Toole, resigned in December after his Supreme Court challenge to the ICAC’s corruption findings failed.

The ICAC also recommended the Director of Public Prosecutions examine whether Mr Tagg should be pursued for breaches of campaign donation laws.

Found this little gem of a video which correctly makes the claim:

The corruption and abuse of powers is endemic to police here and in many  other countries.

This is not a mistake, the system is designed this way.