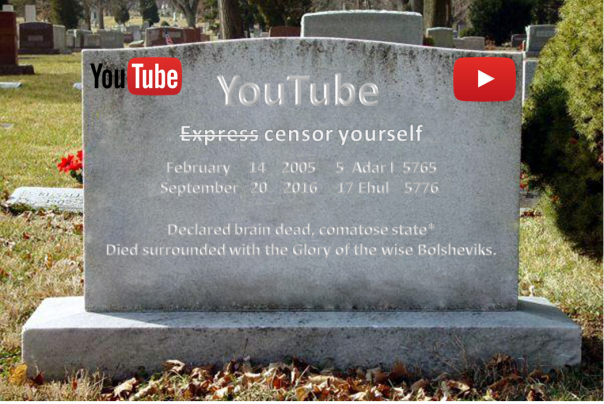 The mainstream media failed us so we turned to the internet, and now that is also failing us.

No it doesn’t look exactly like that, but pretty close.

An of course the more you censor (according to their ideology) the more tools they give you for censorship. Censoring gives ‘hero points’ which eventually allows you to brown nose your way to the top of YouTube hierarchy and  development  teams which is ironic given that this process will be the death of YouTube, and the final prize will be ushering in a dystopian world. 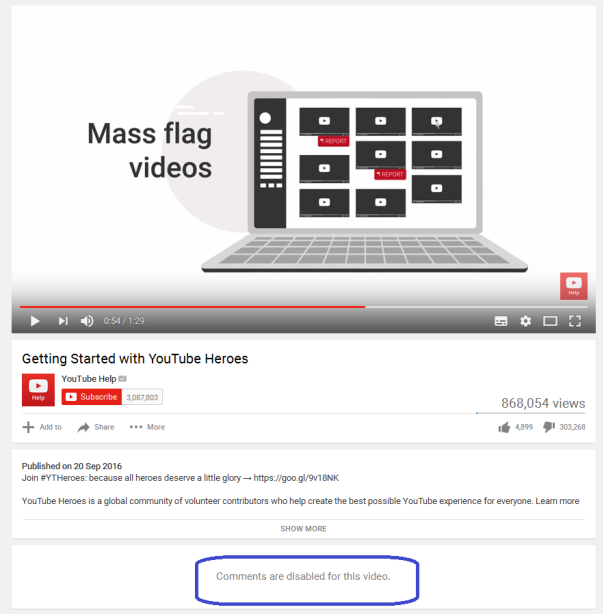 But why just censor videos when you can censor comments too?

What this means is legions of Social justice warriors and other useful idiots will on mass censor out anything that is inconvenient to their illogical, self contradictory world view.

The new cultural marxists will be ‘triggered’ (aka have a tantrum) and demand that their ‘safe space’  (aka playpen) is disturbed and demand censorship.

We are allowing insane brainwashed children to dictate what can be seen and discussed in this world, think about the consequences of that.

Often the only defense for a non violent activist against brutality, is the ability to share video proof on the internet, and now the second largest website in the world (which hosted much of this content) is about to allow third party censorship.

On a related video of how to blur out parts of a video, you begin to see the venom of the actual YouTube Community.

Because the comments will be censored in the future, here they are for posterity:

99batran
99batran8 hours ago
I kinda need this video so.
ΞΞΞ ΞΞΞ
ΞΞΞ ΞΞΞ2 hours ago
Because of fucking leafy and those types of cancerous channels. The 12 year olds will just go around fucking everyone up inaccurately.

luc cruz
luc cruz21 hours ago
oh here comments are not deactivated. ONLY ON THE HEROES VIDEO, I SEE.    FACELESS ASSHOLES
108

ARandomCanadian
ARandomCanadian1 day ago
Wonder why they decided to block comments for their Youtube Heroes video aka thought police. Remember, Big Brother is always watching you.
117

It’s because our data for them to mine and sell is plenty good enough for them but the mere peasants who keep them in business aren’t worthy of offering criticism.

Now that they have pretty much a global platform they’re going to turn it into an echo chamber. Activate the Tumblr hive to remove controversy. They just fail to mention that the items that are controversial to one side are the way things should be to them and their drones.

In other words, it’s going to be an idiotological takeover (and yes, I know what I typed) by those college kids screaming and shouting for people to respect their playpens… I mean safe spaces. People like Undoomed, Sargon of Akaad, etc. will figuratively have their heads put on pikes on the home page as a warning to other sane people who might expect reasonable discourse on a publicly accessible communications site.
10

ebertmadwoman
ebertmadwoman1 day ago
Because they dont want to hear any negativity for what they are doing.  I believe they are going to regret it…..
4

kankeinai
kankeinai16 hours ago
Hey, I don’t care you blocked the comment section on your “Youtube Heroes” video, I will complain here, it sucks
23

John Pratt
John Pratt15 hours ago
RE #YTHeroes, If YouTube isn’t a place for dissension, YouTube isn’t a place for art.
20
twistedmetalplayer21
twistedmetalplayer219 hours ago
Fucking Morons, turning off comments on the YouTube Heroes video like cowards because you can’t handle criticism from the community that makes you rich.
9

What could possibly go wrong?
31

ebertmadwoman
ebertmadwoman1 day ago
Hey Youtube, we were doing fine, its Only “”Words”” in the comments section , if we dont like, we just ignore.  yes some people will argue , so?  Last I checked ‘sticks n stones may break my bones, but words will never hurt me’.
12

ZachSplat
ZachSplat3 hours ago
Let me get the dictionary
Anarchy Empire
Anarchy Empire11 hours ago
screw you and your heroes program, we have it hard enough as is an then you pull this ckack! what is the mater with you!!!!!
8

Epyc Wynn
Epyc Wynn11 hours ago
Since they disabled comments in the other video on ‘YOUTUBE HEROES’, I am now going to post here. YouTube, imagine every generic insult a user could muster, combine it with some well-justified anger and reasoning, and you get the gist of how this comment would go if I thought you were worth the effort. Everyone, let’s go to Vimeo, Dailymotion, and Newgrounds. YouTube is no longer interested in its users and is taking its position in the online video-sharing market too far for any reasonable user to stand.
7

Terry Einstein
Terry Einstein15 hours ago
what a nice way to take criticism, disabling comments. You should’ve disable dislikes too.
The heroes idea is stupid beyond measure!
And the name sucks

We end with Stalin’s anthem of the USSR (CCCP).

Chorus:  surrounded with glory, soldered by [our] will.

Free children of a state unprecedented [until now],
Today we sing our proud song
About the most powerful party in the world,
About our greatest man ever.

You have created a country on our land [starting] from the Kremlin,
The able Motherland of free people.
Our Soviet state stands as rock
Born by your power and truth.

Rotten breeds of lowly treachers
You wipe from your way with a formidable hand
You are the pride of the people, the wisdom of people,
the heart of the people and their conscience.

The sparking genius of Marx and Engels
Envisioned the future rise of the commune.
Lenin has outlined us the road to the freedom
And great Stalin is leading us through it.