Middle eastern military coups are generally very bloody and normally successful, the fact that this one wasn’t is a worrying sign. This ‘coup’ may have been staged, a ‘false flag’ attack to give Erdogan the trigger to purge secular opponents to his plan to further Islamize the political control of Turkey.

It also bolsters the public support for Erdogan, who has become quite authoritarian since taking  power. Since Erdogan took power journalists have been jailed and political commentators/bloggers have had websites shut down. Now Erdogan is purging academics.

Ottoman Empire 2.0 is on its way, and its on the doorstep of a economically weakened Europe that is becoming politically divided.

Them days are gone

Bureau of what? Anyway a very compelling video of what the media has censored out of the immigration debate for years if not decades.

So why do you think Muslims are moving to the west? Their societies are about to crumble under the weight of massive over breeding and dwindling natural resource to exploit. After decades of living from oil these Muslim nations have in most cases not developed any other exports and will simply collapse without oil. We are seeing just the first waves of economic migrants from Muslim dominated failing oil states. Muslims nations currently only produce 5.8% export goods as much as typical non-muslim nations. Woefully in-competitive. So now they will demand welfare from the western world with threats of violence, there are other words for that, mugging, theft, extortion.

In just 4 day we have had major terror attacks in France and Germany, just a few months after the Syrian refugee/invader crisis began.

The attacks will only get worse if people don’t awaken to the true agenda of Islam; to conquer, by any means necessary, all lands it finds its followers on.

The backlash will begin soon. 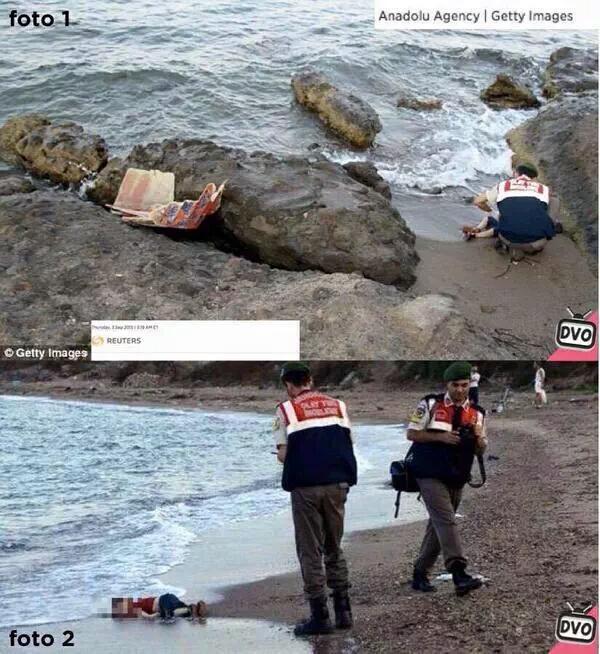 At the very least the body was moved for better PR.

Why? Because the Turkish government is looking for an excuse to offload its refugee camps to Europe.

Other things to note: the pristine condition of the body which allegedly had been in the ocean for 3 days.

A body in the ocean will normally show bloating, discoloration and markings of predation from fish and birds. This body looks only hours dead at most.

The baby’s father had been in Turkey for years, and only wished to go to Europe to get free dentistry and only once the migration had become a difficult to vet flood.

So before you throw all of your logic in the trash after seeing a single disturbing image, keep things in context and perspective. Is one dead baby on a Turkish beach reason alone to change all of Europe’s immigration policy.

And don’t think for a minute that a government wouldn’t go to great lengths to make fake footage of events to drive agendas.

Here is the Norwegian government being caught out funding a hoax film of the Syrian civil war. When caught out in the lie, they always revert to attempting to start a conversation about the issue.

Kurdistan begin selling oil to Turkey, but not via Iraq.

The firs steps towards a new middle eastern nation are being taken today, with Kurdistan beginning sales of oil to Turkey. The Turks have been paying quite high prices for oil lately, so there is at least one satisfied customer but the economic price is just one part of the cost to consider. Iraq is clearly not happy as they feel it is their oil.  Kurds might argue Iraq only ever existed (and was created) so that the British could get control of oil and have it delivered to the port of Basra.

The geopolitics of oil now have  new factor in the complex equations of diplomacy. If Turkey Joins the EU there will be an oil state on the doorstep of the EU. Could a pipeline from Iran to Europe now be more feasible. Will Kurdish people flood to the newly cemented state?

Just like a new service station opening up in your town or city there are always flow on effect. Everything in the Middle east just got a little more interesting.

Good Luck to the Kurdish people.

Kurds already control a region in Northern Iraq, but may want significant parts of Turkey, part of the border region of Iran and even some of Syria and Armenia.

With access to the oil trade some of these wishes may be fulfilled, but  like any transaction is there a willing seller, and what will be the price?

How to show your alarm to the deteriorating  situation in your country after a civil rights crack down.

Make some noise, show that people are concerned, show that things are not normal. Show that what happened was (and still is ) not acceptable.

Good luck to the people in Turkey, I hope you get the changes you are seeking.