Niggers ‘chimp out’ for the right to steal in Ferguson MO

OK I said it Nigger. Nigger, Nigger, Nigger… That’s what they want to call them selves, but if anyone else says it they are racist or prejudiced, even other blacks.

So lets face it Nigger is not strictly defined by race or ethnicity, its actually defined by a value system that promotes theft, thuggery, violence, drug dealing, drug dependence, ignorance, misogyny, tyranny and squalor, basically Marxism for the very stupid.

Of course you can contribute to society if you chose to and put in some effort and learn a useful skill. In the accounting of life you can chose to be an asset or a liability, too many people are choosing to be a liability.

So you can be black and be smart and/or successful, but you probably need to pull your pants up, pay for things at the store, and earn money rather than stealing it.

So lets spell it out really clearly:

1) A large frame man (Man A) steals a box of cigars from a store using threats of violence.

3) Man B stops further up the road and gets out of his  car.

4)  Man B is stunned and partially blinded in one eye from the punch, Man B is afraid Man A will try to steal his gun and then kill him.

5) Man A charges at Man B, Man B yells at Man A to stop, Man A keeps charging.

6) Man B starts shooting at Man A, because that is the only way he can preserve his own life.

7) Man A receives multiple guns shots the last one or two being fatal.

So who is at fault here, Man A or Man B?

If you say Man B is at fault you clearly aren’t looking at the facts, and it is you who is prejudiced.

So the Niggers start rioting and looting, attempting to create a race war and blame all the non-Niggers for it. Marxist are all over it, but as usual are backing the wrong horse.

Police brutality and excessive force are sadly common, I have seen plenty of it first hand, but this was not an example of it. This was an example of a man defending himself against a murderous thug.

Thugs please be fore-warned: I will defend my self using everything at my disposal to defend my life, So don’t be surprised when you get your ass handed to you.

They are at it again, two police officers shot at a ‘protest’ in Ferguson MO.

I wish I was making this up, it really has gotten that bad.

Prevent the political sacrifice of a victim of crime

This man received serious head injuries as a result of being assaulted by a wanted criminal attempting to steal a hand gun.

Don’t let the Marxist and thugs win the media war or allow the political sacrifice of a man trying to save his own life.

Here at occupy we saw real heavy handed unprovoked use of force by police. We were beaten, robbed, harassed and slandered. When did we resort to looting or violent assaults on the public, never. We know what real injustice looks like and we know a Marxist media hijack when we see one. The tactics are always the same. Ignore and/or suppress facts, manipulate opinion, make illogical, emotionally laden arguments, ad-hominem attacks on opponents and even on victims of serious crimes making a formal complaint.

Officer Wilson will possibly be partly blind in one eye for life, his opponents have always been willingly ‘one eyed’ for some time.

Great work from Stefan Molyneux, cutting through the bullshit once again.

Just because the police are assholes, it doesn’t mean that you aren’t.

Ballistics seem to indicate that Michael Brown (a Football player) was charging at the the officer who shot him.

Analysis of the pattern of hand gun shots seems to indicate a shooter who shot in a hurry in a tense situation, starting by jerking the trigger then tightening his grip, then too little trigger pressure. The last shot seem to be pushing anticipation recoil or perhaps even impact of the charging assailant. 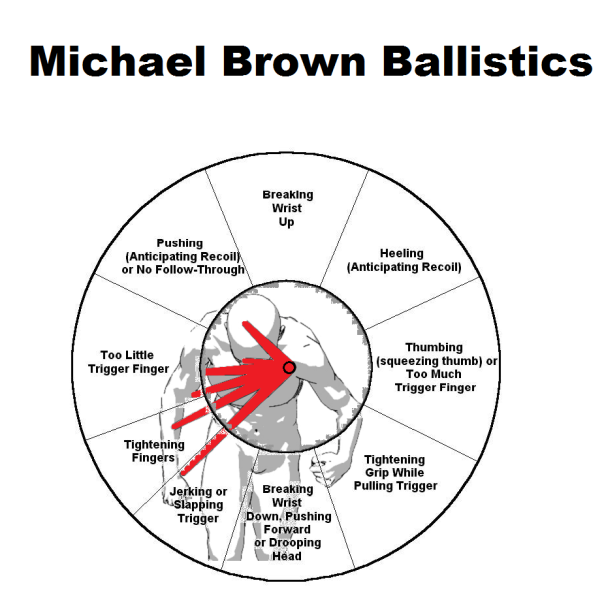