So when authorities catch up with the male star of this video they will have the requisite evidence and admissions that the women involved attempted to kill him before (throwing a chisel and nail gun nails and his windscreen) and after ( attempting to run him over) the much publicized video clip section.

Never a more clear case of ‘Ex causa turpi’ if I ever saw one. If we ever meet this reluctant hero well give him the box of XXXX stubbies that Kevin Rudd still owes us.

A solid punch in the face; for when “please stop trying to kill me” is not really a sufficient reply to gain a change in disposition.

So if you think violence does not work, you’ll find its the first thing police will try to solve a problem.

We actually do some research here, and we found this which is quite good. Ex causa turpi (non oritur actio).

Basically it means to go to court and have the court rule in your favor you must not have been acting badly at the time. If you were acting badly the court may (and probably will) simply throw out your case. 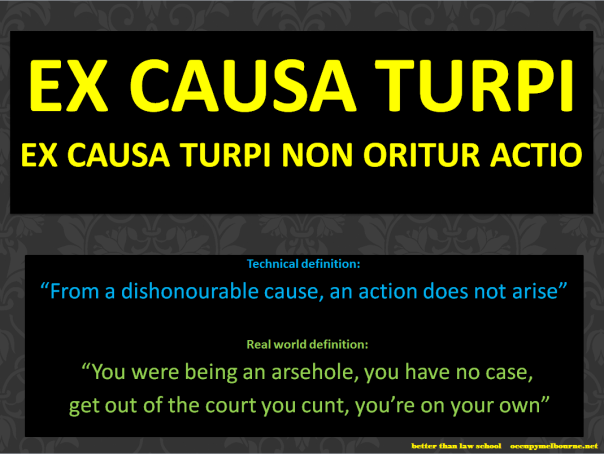 This is why video evidence of cops (or other scum bags) doing the wrong thing is so important, any case they may wish to bring against you is automatically ruined on proof of ‘Ex causa turpi’. Imagine a police officer trespasses on your land (ignoring the many ‘no trespassing’ notices you have displayed) and you beat him with a stick when he refuses to leave, as he was trespassing, he has no cause of action in court. you probably don’t have a case either, but winning against cops in court is almost impossible anyway, so you were better off dealing out your ‘hillbilly justice’ anyway.

A powerful and simple tool to eliminate vexatious actions.