George Orwell from the grave

George Orwell (Eric Blair) gave this interview while dying of TB on the isle of Jura. He had just published his final classic ‘1984’. In the 1930’s Orwell had gone to Spain to fight for the Spanish anarchist revolution, he was badly wounded by shrapnel and spent significant amount of time in hospital there. It is believe during his time in Spain he learned of the political agenda explained in the work ‘1984’. Orwell likely wrote 1984 once he knew he was dying of TB as he believed that publishing such a work would make its author a target for assassination. He likely felt he had nothing to lose as he was dying anyway. In the footage you can see him breathing quite quickly after the interviewers first question. He did claim the world was heading towards the dystopian future he predicted. The book 1984 is peculiar for its inclusion of vast tracts of the party’s secret manifesto, as though he wrote a book to encapsulate the publication of such a document.

Chillingly he turns to the camera and says:

Don’t let it happen, it depends on you.

If you haven’t read ‘1984’, you should. ‘1984’ predicts so many things it is uncanny, webcams, the surveillance state, SJWs, endless wars and switching allegiances, a dumbed down population either complaint or ruthlessly oppressed, the narrowing of human emotion to just a few base states.

But is is all around you, so much so you just don’t notice it. Even when writing this article I noticed this: 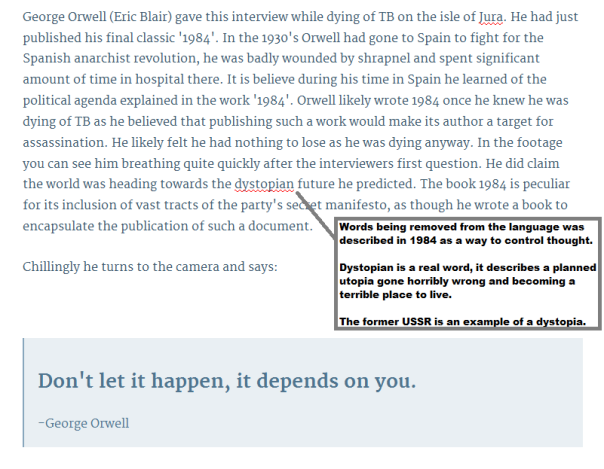 So more than an excuse to make you read again the article it shows that slowly and steadily the progressive march toward total tyranny continues.

And yes that’s exactly what progressive means, progress to tyranny, and anyone who thinks differently is just a useful idiot.

Do we really need to explain more than this? Big brother is watching you but he forgot his binoculars, spectacles, and pants.

Need a private conversation? The future is end to end encryption, and the latest is Redphone:

Redphone allows you to use your own phone number and is very easy to install and use.

More privacy apps including secure text and chat available at:

Pervasive state surveillance in the theme of 1984

To quote Ben Franklin “They who can give up essential liberty to obtain a little temporary safety, deserve neither liberty nor safety”

So how does one know if the state is pervasively surveilling you?  I propose to you that if you have not injured another then there is no need for the state to keep records about your activities.

Now let’s have a little look at some of the surveillance programs the state runs.

Trapwire is definitely something you should have a look into, it collects data from basically everywhere and compiles it into a centralised system to determine who is a potential threat.

Please consider that the federal government is proposing a massive expansion of the surveillance of the population, that has been described as “this proposal is akin to tactics that we would have seen utilised by the Gestapo”.

Now I think we are all smart enough to realise that once a power is granted rarely very rarely is it ever retracted.  You should also be aware that the greater the surveillance the closer we get to a totalitarian regime.  History shows that the greater the corruption and largess in government, the greater the need to watch the populace for paranoia and a fear of rebellion grip the inner circle of power.  If your interested in history, why not have a quick look at the files the Stasi kept on the citizens…

Some might propose that the collection of information is only a problem for criminals and terrorists and can be used to do real good.  Well since we have a rule of law…  why not employ it and use it to gain a warrant to track someone?

One could consider that access to “cyberspace” is not a right – it is a privilege. Some countries have adopted
the International Computer Driving License (ICDL) or related constructs to deliver necessary ICT knowledge to
their populations. An Australian ICDL could include “rules of the road” including balancing “free speech” with
the consequences of cyber bullying, libel, computer ethics, and an education about other important cyber
issues such as cyber crime (including fraud). In situations where someone has violated the code of conduct
or committed a crime, a judge could have the ability to suspend or revoke someone’s Computer Driving
License.

So I leave you with the answer, with some humor, because without it the world would be a terrible place: