So quite a few people are probably wondering what is going on following Australia’s federal election. Well the democratic process just got turned on its head. Just imagine you have a group of 10 friends who want to go and have a fun activity. 4 people want to go to the beach, 4 people want to go to the pool the last 2 people are a bit undecided. The last 2 people realize that despite being in the minority compared to either the beach or pool factions their decision becomes the deciding vote. This situation is called king maker or wedge politics. But it get even more complex, the last 2 people will get all kinds of additional offers to secure their votes to either the pool or beach factions, free ice-creams at the beach, umbrella seats at the pool. Sometimes even after all the inducements the undecided faction can get split and the beach and pool factions end up split 5-5 meaning complete deadlock. Even weirder is the result when the undecideds want something completely different, like ice skating or ballroom dancing which can lead to another deadlock. Making matters worse for the Australian government is that this deadlock seems to now exist in the lower and upper houses.

So this becomes hellishly complicated when you consider that some of our kingmakers might have been to the pool/beach before and hated it. Some kingmakers have connections in both houses so they can wedge in two places at the same time.

In talking about people we will mark their name with the number and type of seat they hold influence over (1R) for 1 in the house of representatives, (1S) for 1 in the senate, (1S +1R) for one of each.

Tony Abbott (1R) NSW was the opposition leader the last time there was a hung parliament in 2010 and failed to get the coalition over the line. In this parliament he goes in as a recently deposed prime minister who was toppled internally by a margin of only 6 votes. The usurper was Malcom Turnbull(1R) NSW and several of his key supporters have lost their seats and right now Malcolm may not have the numbers to remain leader. Worst of all Turnbull campaigned on ‘stability’ and the double dissolution he deliberately triggered has resulted in one of the most unstable parliaments possible. The liberal party may be secretly planning to bring back Tony Abbott as being a more popular figure despite knowing he failed to clinch a deal the last time a hung parliament resulted.

Bob Katter (1R) QLD, was one of the ‘3 amigos’ in the 2010 hung parliament, the block was split and one of the other amigos Oakeshott went with Gillard and Labor. The 3rd amigo was Tony Windsor who this time around unsuccessfully challenged Barnaby Joyce (the deputy leader) for his seat. Katter seems less likely to support Labor being a former National and seeing what they did last time. Katter is also a Queenslander with strong connections to the rural sector. Will he team up with Hanson who may have as many as 3 senate seats? It’s worth pointing out Katters family ancestry is from Lebanon way back when it was a Christian country.

Pauline Hanson, (3S) QLD, anti- establishment, anti -immigration, anti- muslim, and completely on the pulse with a lot of disenfranchised right- of -center voters. Prior to the election Malcolm Turnbull famously stated Pauline Hanson is not welcome in parliament, now she has 3 (maybe 4) senate seats. Now that is going to be an interesting negotiation.

Nick Xenophon (3S+2R) SA with the NXT party he formed  will be the biggest power broker in the wedge, commanding both upper and lower house seats, which he seems to have gained at the expense of the liberal party. His power base is largely in South Australia and being the son of Greek and Cypriot migrants seems unlikely to get on the anti immigration bandwagon. He will likely try to drive manufacturing back to south Australia, such as the troubled Whyalla steel and possibly naval ship building.  The Federal Government will suddenly realize that South Australia exists.

Jacqui Lambie (1S) TAS  got into the senate on the now all but defunct Palmer United Party, she has survived the implosion and now created the JLN which at this stage seems to be a one woman army. She seems to have a lot in common politically with Pauline Hanson, being a nationalist,  anti islam and showing strong streaks of anti -establishment.

Derryn Hinch (1S) VIC. The” human headline” becomes the senate wrecking ball? Hinch famously went to jail for 50 days for releasing the details of paedophiles. Hinch survived liver cancer, seemingly at the last minute via a transplant. Strongly anti -establishment with a massive media following from decades of work on radio  and TV. Hinch may be looking to shake up the justice system , he has already talked about removing compulsory voting. Hinch will be formidable in any wedge faction.

Cathy McGowan (1R) VIC. McGowan was the result of a grassroots campaign in 2013 to replace a liberal safe seat with someone who actually listened to their electorate;  the campaign approached several people to run against Mirabella and McGowan took the offer and has run as an independent since. Get ready for a big pork barrel to be rolled out to Indi in rural Victoria. It seems dumping the duopoly really has great perks.

Adam Bandt (1R) VIC will be rusted onto the Labor Party.

Andrew Wilkie (1R) TAS will be rusted onto the Coalition.

That means they cancel each other out, so as usual they are both politically irrelevant.

So finally, the wedge!

As we can see,  a lean to the Right seems assured in both houses as all Seats are to the political right of the NXT bloc. Even if Katter and McGowan can be lured to the left in the lower house, the senate seems overwhelmingly leaning to the right.Votes are still being counted so things could change, it’s going to be interesting!

Pauline Hanson’s One Nation Party surge in popularity may be been from the vacuum caused by The implosion of the Palmer United Party, both parties being right of center, Senate focused and based primarily in Queensland.

Tony Abbott and Malcolm Turnbull were both listed as have one house of representatives seat each as their level of influence. They both have far more influence than that, though its impossible to determine how much influence they have right now. The level of influence Abbott/Turnbull have is potentially zero sum game, as one gains influence as the other loses  influence within their own party and coalition. 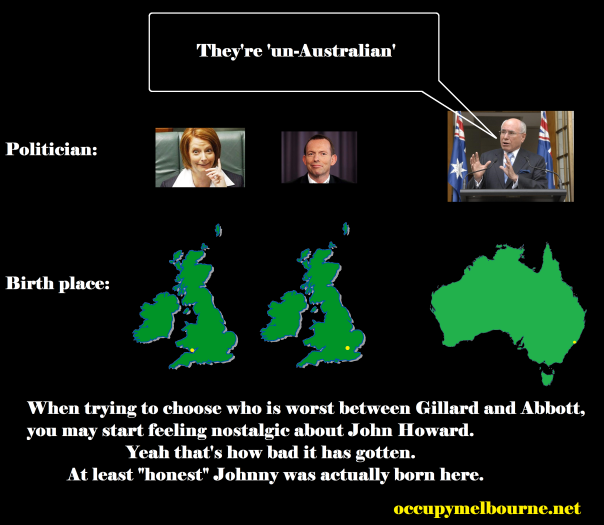 This was not a paid message from Kevin Rudd ’13, who did not drop off a slab of XXXX and a case of Bundy this arvo, and who is definitely not considering a leadership challenge.

Kevin does not want to stress that he was born in Nambour Queensland, and is a true blue Aussie bloke who likes strip clubs and and getting pissed overseas as long as the Mrs doesn’t find out. 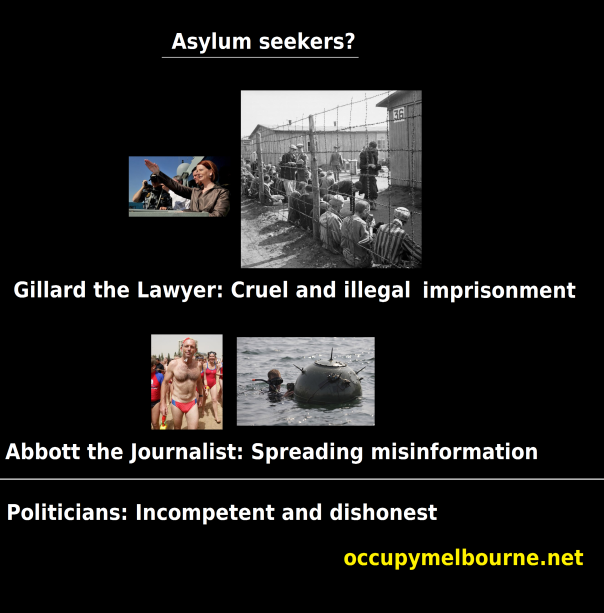