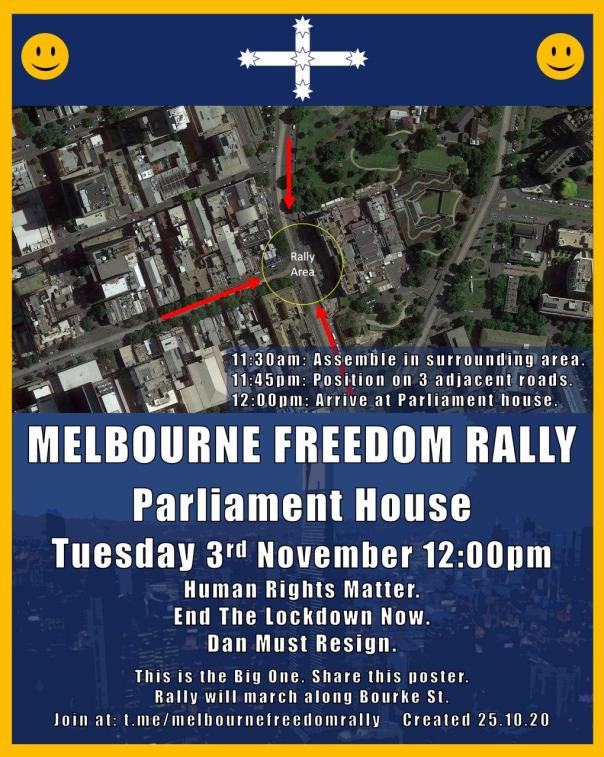 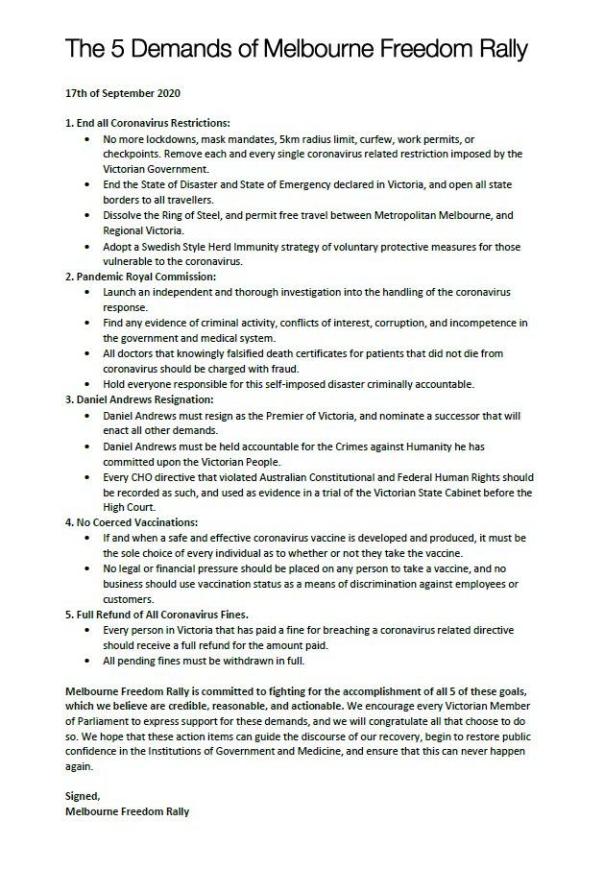 Time to get your popcorn or a cup of coffee and be prepared to be shocked, and then later enlightened.

Firstly we’d like to thank the brave souls who are attending these protests, your movement is growing exponentially, possibly faster than Dictator Dan Andrews megalomania.

An Agent Provocateur is a person who attempts to create trouble in a protest. Some are police or other government agents , some are counter protestors, some are just mentally ill, some are more than one category. Police and governments have long used infiltrators to gain information, misdirect, betray or entrap protestors and their protest groups.

In the above video what we most likely witnessed was a sneaky but brazen attempt from a police officer to direct a snatch squad but attempt to remain hidden in plain sight at the same time. His actions are only really obvious for 10 seconds and then he is gone. Even after this is not immediately obvious what happened.

So how does one spot an agent provocateur or undercover cop?

There are many ways.

Talk to them see what they know about the issues you care about, mostly they have only a superficial understanding, completely incorrect ideas or none at all. Be sure to lecture them and correct them, who knows they might actually change sides while they are listening to you. They can’t be doing damage in other places while listening to you. Some AP’s refuse to listen to the issues, a real red flag.
Their back story, where do they live what do/did they do for a living? Where did they go to school? who else to they know at the protest. Have they protested before? Does their story stack up? Cross reference it with other people.

What they are wearing. Cops have a very specific way of dressing even when undercover. They have a uniform attitude which really stands out. pay close attention to the shoes, cops seem to really love those hard wearing durable leather shoes.

Who do they know. AP’s often work in teams and occasionally will talk to each other, but you’ll notice those two people seem to have nothing in common. AP’s have a secret diffuse network of other AP’s who have little in common and they seem to refuse to ever meet in a groups in the presence of other protestors.

They cause trouble. AP’s start arguments, they want to know who is friends with whom and then attempt to break up friendships by starting arguments and spreading poisonous rumors and allegations. AP’s usually want to understand the hierarchy of a protest group and either ‘white ant’ the leadership or insert themselves into it. They are always interested in future plans.

But you can learn more on the subject of Agent Provocateurs with a web search.

After Vic Pol declared the protest legal, Dick-Tator Dan promptly declared it illegal and used police as his private army to suppress dissent. It didn’t work this time, as the police were outnumbered by thousands of protesters. Still, the mainstream media chose to lie about the numbers and also claimed the protest was violent instead of peaceful. The only violence came from VicPol and one of their horse-hating plants.

Here we go again , round 3, this is how it all started in July :

“East Preston Islamic College was closed on Wednesday following a positive test for a Year 5 student who should have been isolating due to a close contact’s infection.

DHHS is planning a testing blitz in the northern suburbs of Melbourne and is urging anyone with symptoms to get tested.

Additional cases linked to this outbreak have also been identified in a social housing block in Broadmeadows. The Department of Health and Human Services has issued advisory notices to 120 residents asking them to self-isolate for 48 hours, to get tested and to monitor for symptoms.”

Anyone who still thinks this virus can be fought with extreme lockdowns is simply kidding themselves.

This is how it’s done : A bunch of German protesters walking through a shopping mall without masks without being stopped because they have safety in numbers and keep moving.. However, they only have to wear masks indoors anyway and the curfew they are protesting about later in the video means that pubs have to close at 11pm. (Berlin is famous for pubs staying open all night!) Lucky bastards, I wonder what they would make of the Melbourne situation?

Get Back To Where You Came From , Kiwi Superspreaders ! 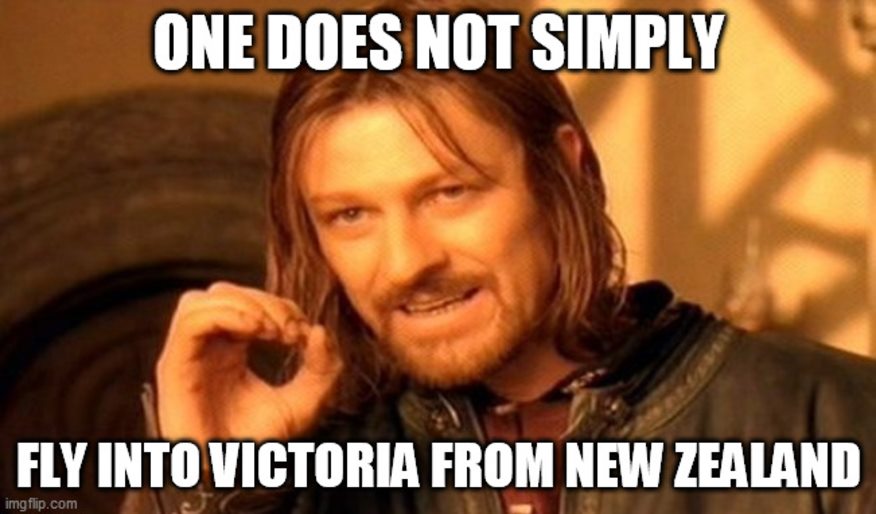 Hughesdale- The Centre Of The Melbourne Lockdown Resistance

Gladys Berejiklian is single and so is her former secret Beau Daryl McGuire. So they are single and ready to mingle, bonus if you are OK with prison visits.

If you are a dictator you are always 50% single.

Get in now folks these hot new single won’t be available for long and possibly will be imprisoned anytime now.

We decide when the lockdown ends, not Daniel Andrews

From an anonymous barrister, reblogged from Social Media (corrected and edited by Grumpycat333) :

“Know this: Lockdown Orders have zero legal standing. Why did Daniel Andrews desperately want the Omibus detention powers? He had the existing fines mechanism to enforce Directions orders which are the basis of the lockdown. So why the need for new powers? This answer is because people are waking up.

Everyone should go and read page 106 of The Public Health and Wellbeing Act Division 1 Section 111. It states: the spread of an infectious disease should be prevented or minimised with the MINIMUM RESTRICTIONS on the RIGHTS of any person.

The legal drafting and clause construction is very clear. It says; the Chief Health Officer can do his job to stop the spread of an infectious disease, BUT a person’s rights restrictions must be minimal. He has a qualifier and restraint. He doesn’t decide what’s minimum. So who does decide what’s minimum?

If a person, whose rights are being restricted has no say in the matter, there would have been no need to include the clause in the legislation. The Parliament sought to preserve and protect civil liberties. It’s a check on unfettered powers. That is the purpose of the clause, otherwise, why have it in the legislation, if the Chief Health Officer has unrestrained powers? It’s a reminder of the constraint on the Chief Health Officer.

The Westminster system constrains, separates, checks and contains power, through a mechanism known as the Separation of Powers. This means that legislature (who makes laws), the Executive (Premier and Ministry) who execute law, and the Judiciary who interpret laws, remain separate. This is a check on power so it’s not concentrated as we seem to have in Victoria at the present.

The default ‘Mentis’ (mind) of Parliament, in a liberal democracy, is to preserve freedoms. Particularly the freedom of movement and association, which the High Court has protected over and over and now Daniel Andrews thinks he can extinguish. The person who decides what’s a minimum restraint on a person’s rights is the person who has the rights.

If that person has no say on what’s a restraint, the person would be deemed to have no rights, so why mention them? In this event, the person at best, has privileges which can be limited or extinguished. Like a driving license. True rights can only be suspended or limited by the right’s holder. These are known as inalienable rights. God given, which cannot be extinguished by the State, the Chief Health Officer or Daniel Andrews. Division 1 Section 111 was drafted in acknowledgement of this liberal democratic principle. The Section is even referred to as the Principle of the Act, against which all Directions Orders must be measured. Case closed.

What I have just set out is legal argument that a Barrister might make before a Magistrate, who is usually ill equipped to handle such arguments. Now you understand why the last thing Daniel Andrews wants is fines to be challenged in Court. Push the problem into the future or maybe even forgive fines so they never see a court room . Victorians don’t know or understand the law and Andrews feels omnipotent whilst most Victorians are oblivious and kept in the dark.

The average police officer in the street is even less well equipped to handle these matters, so don’t try to enlighten them or argue whilst being issued with an illegal and worthless fine. They have no idea. They’re just following orders. In any event, fines are only allegations and not findings of fact or guilt. Fines become an admission of guilt when you pay them. That’s why the fines can be challenged.

Daniel Andrews’ decrees from the podium have zero standing and will never stand up in court when the BS fines are challenged. They’re all a big bluff. The lockdown is a bluff. It’s no wonder the Magistrates Court has adjourned all Covid challenged fines well into 2021. If one illegal fine gets before a court, Andrews will buckle like he did with the curfew when it was uncovered as a fraud. The Directions Order will be found to be as illegal as the curfew. The day before the curfew was challenged in the Supreme Court, is was quickly ended by Andrews. The 5km restraint is equally illegal as an excessive restraint on the rights of Victorians. I remind you. If Victorians have no rights, as Andrews asserts, then why mention them in the Act?

While Andrews can’t be removed as Premier, he is subject to the Westminster system of Separation of Powers, which means the Parliament or Courts can clip his wings and stop his tyranny. As he has the numbers in Parliament it’s useless to try a no confidence motion against Andrews, so we’re left with the Judiciary and the Courts.

Being awake and informed will set you free. With the legal illusion of fines swept away, so is lockdown. We decide when the lockdown ends, not Daniel Andrews. The police will run out of ink in the their pens writing fines if we don’t co-operate. It was for this reason Daniel Andrews wanted detention powers in his Omnibus Bill. He feared someone would write a post like this, and wake up Victoria. “