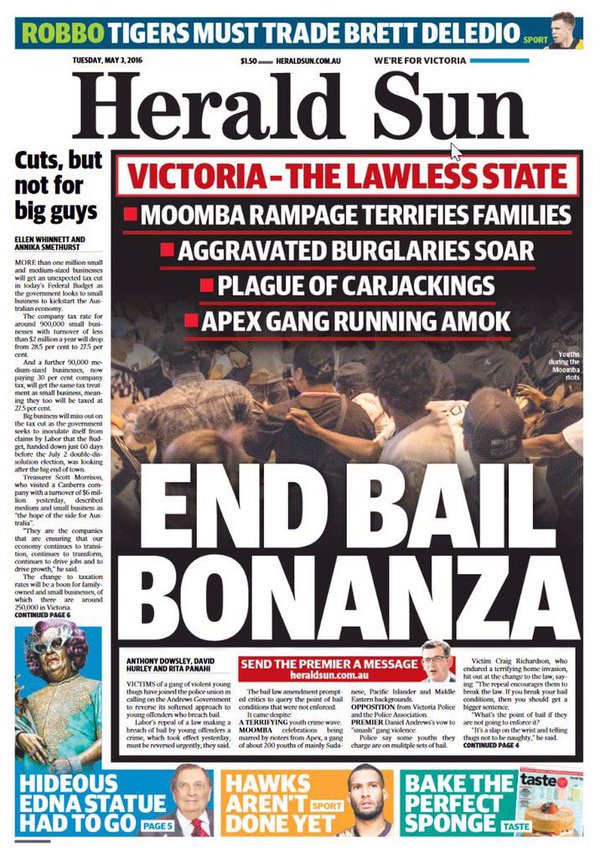 Ok it is the Herald Sun, where fact and opinion are often interchangeable depending on weather. But they have a point even if they don’t realize why.

After reading this sensationalist headline we rushed straight down to the pub to interview Graham Ashton Chief commissioner of Victoria police to find out what the go is. He gave a remarkably frank monologue.

Ok so crime is on the rise in Victoria, its hardly a surprise. You see, my officers are specialized in abusing women, chasing traffic fines and the guys that spray paint the trains. You know, easy low risk stuff where we get to be bullies and get the most money. We don’t really deal with crime unless there is a photo op in it for us. You see what the public does not understand is that Victoria Police is in itself a criminal enterprise. We are a crime gang, it just suits us that this fact is not widely understood. We have the backing of the state because the state needs to use violence and coercion to function as it has no legitimacy. We see other crime gangs as competition and we see the public as cash cows to be milked, we take our percentage and pass on the rest to the state. I mean just because you know our names and we show our faces they does not mean we are not crooks. We are just the top criminal predator in the public ecosystem, we don’t have to hide and we have the public largely fooled or to afraid to oppose us. Lipstick on a bulldog, its still a bulldog. Put a crook in a pressed, professionally laundered uniform, its still a crook. If you look a bit deeper into it we are here ‘to maintain public order’ which means keep the public afraid, weak, poor and defenseless while the fruits of their labors are extracted to the maximum profitable extent. You are a  cow on the farm, we are the farmers dogs, its as simple as that. We bark and threaten to get you where the farmer wants you to be. We are professional bullies. Why do you think there are so many programs in schools to identify bullies? It not to stop bullies, it’s to study the latest methods of bullying and find the future recruits. Come on think now, surely you remember a nasty bully from school who became a police officer. At the time you were thinking “I’m amazed he got into the police force”, it was not an accident that he got the badge. You might be thinking “So what of the women who join the police?”. Well they are a mixed bag. Think of the kind of women who are attracted to a criminal motorcycle gang, those are the kind of women we get as recruits. Party girls who like tough guys, women who really like sex, drugs and hard drinking and there are a few dykes who wanna show how tough they are, some have moderate success.  So these women see Victoria Police as a dating service and social club. Of course the public face of this is we are ‘inclusive’ and have a ‘gentle side’. The reality is we treat female police like whores, they are just there to keep they guys entertained so they fight each other less often. There is no shortage of new female recruits either, so it really does not matter what we do to them, they can’t complain, we are the police, they can only quit and keep their mouths shut, or else! Occasionally female police are useful where deception and information gathering get better results than brute force. You catch a lot more flies with honey than vinegar. So if you want to understand the inner workings of a police force look for a good book by a former outlaw biker. As police we compete and collude with other criminal gangs at certain times when it suits us. We have to carefully manage public perception and we must always be the stronger player in any dealing. We also must always maintain the air of being always correct and not getting caught out on our lies and crimes. There is always the threat that a stronger force will arrive and topple us and the state out of our position of control, it could be an internal force, like a crime gang or a civil war or external like an invasion. This is a real threat for several reasons

1) We have disarmed the public so they can’t fight back against anyone. It would not take much to conquer this state or country, And it would be very hard for us to win it back.

2) People have lived under a legal system, a system that was never meant to make sense or be fair. People are conditioned to accept any new law no matter how insane it is. This gives a new despot a compliant population. Tax on red hair? Special parking for left handed people? It’s all up for grabs.

3) There really are no laws, its just an excuse to deprive people of their property and liberty. If laws were enforced by robots, most police officers would be in jail by the end of the week. So the police and courts give special treatment to themselves and the controllers of the system. there are so many examples of this its not funny.

4) People are so brainwashed by society that cant see it for what it really is, full of lies and slowly crumbling under the surface. They don’t realize they are ruled over by criminal thugs and they won’t realize the next set of thugs who will take over.

5) People seem to be largely unable to tell the difference between a friend and an enemy because they are so accustomed to having enemies in their midst. If you don’t know who the enemy is you can’t fight the enemy.

So there you have it a police force best described as organized crime. Most officers are of mediocre intelligence, dishonest and likely to be psychopathic in tendencies. So if you think its bad in Victoria right now, its only going to get worse. I’m telling you all of this because these days people are just too brainwashed to realize the truth, people are to atomized to join forces against us, and lacking the belief in principles to actually fight for. That’s how you end up with a legion of thugs and criminals running everything, because there is no one to stop them. The more money that is printed the more we have to take it off the public to keep them poor and under stress. Its all just a dirty game and the public are the lowest rank on the ship getting fed slops and whipped to make them row faster.

And for absolutely no reason, Rick Astley. Does there have to be a reason for things?