So new Zealand needs a new flag. Well about as much as the titanic needed a new flag after it hit that iceberg. Really this is just a $25M dollar distraction for Teflon John Key to keep people thinking about anything except the real problems.

It turns out that even non citizen residents can vote on the whether to replace the old flag. One of New Zealand’s veteran third party politicians is all antsy about it.

But rightly so, why would you let foreign national vote on changing your national identity? One of the original polls state 69% of the population didn’t want the change the flag in the first place. So we thought we would throw out some suggestion for flags, some we found on the internet some we made ourselves. 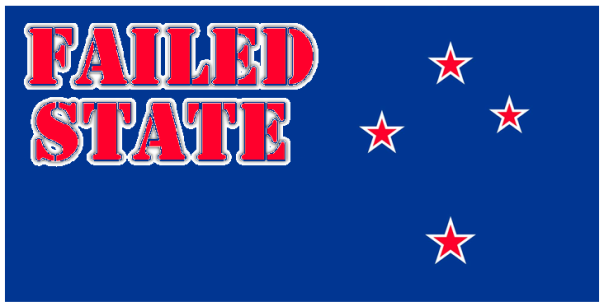 Due to the likelihood of New Zealand becoming a failed state we thought we would offer this one. Yes the state failed, it wasn’t the people’s fault.

So in the event New Zealand defaults on its debts it might (or might be forced to) exercise its option to join the commonwealth of Australia making John Key’s frauds your problem. 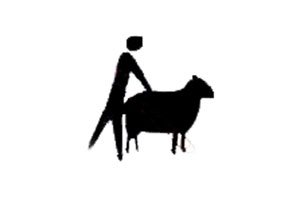 This flag sums up peoples feeling toward the nepotism, corruption, spying and censorship of New Zealand leading to general poverty and starvation in children. They always call them selves ‘great leader’.

New Zealand is also a world leader in skyrocketing rates of domestic violence. Helen Clark really did a great job advancing the status of women, you go girl, get that UN job. Air brush those cracks away.

And here is the foreign exchange swindler himself with and image board mash up of a flag. 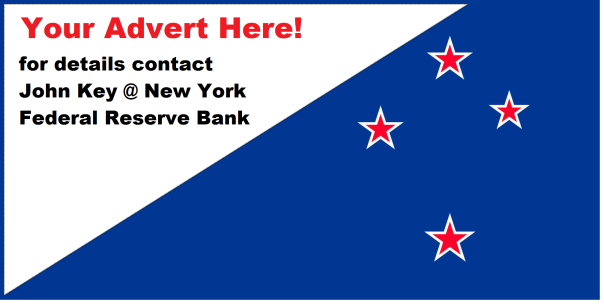 On of the ‘approved’ designs looked like a mash up of the all blacks rugby jersey and the original flag. It wouldn’t surprise a lot of people if this wasn’t a paid product placement. so maybe part of the flag is for rent.

Some New Zealand politician have been thinking up their own flags, i think this one is a little too similar to another flag. at least it doesn’t look like Australia’s flag in this case.

these were the approve designs, the one on the upper right is the contender for the play off with the current flag.

the flag breaks with the ‘field of blue’ theme for obvious reasons. New Zealand soon to be a vassal state of China? They are certainly buying up all the farmland. 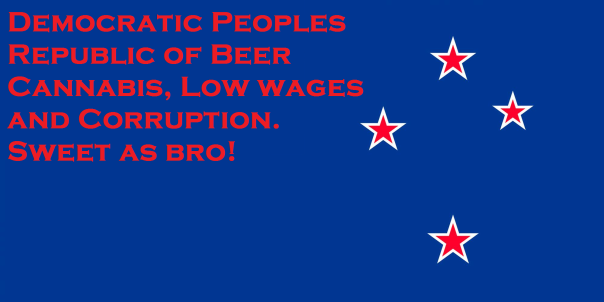 On the subject of peoples democratic republics, how about some truth in advertising?

This flag represent the fears New Zealanders’ have about joining the Commonwealth of Australia as a state, imagine being landed with this as a state flag, just a bit of light sledging mate.

New Zealand government finally gets some professional help and start trying to acknowledge its problems and troublesome past.

To celebrate the 25 % of the population who regularly smoke cannabis, this flag show a popular technique, ‘knives’ and the almost total lack of domestic gas supply.

Nothing to do with Islam

In a move that has stunned many Donald Trump, Presidential front runner, has openly talked of auditing the federal reserve. This is most likely a pretext to exposing the fraudulent system of monetary creation in the USA and reverting to a system of government issued debt free money.

If this were to happen America could make the turn around it desperately needs, If Donald Trump were to die in controversial circumstances in the next few years, this would be the reason why.

How do you say “Howdy Partner” in Arabic?

Haha, my life is complete : X- files producer and writer Chris Carter has – predictably- been  accused of Islamophobia, because, shock, horror, Muslim terrorists in episode 5 of the new X -files (Babylon) blow stuff up and  speak Arabic,omg, Who would have thunk ?. But it gets worse…ah…better, because “red neck music” is celebrated in this episode, along with Stetson hats. And then Mulder utters “we need something to trump all hate. “Trump” all hate. Let that sink in for a moment.

The X-files reboot  currently enjoys huge ratings success. With his episode Carter has done the unthinkable : far from turning the X-files into a space alien chasing nostalgia show , he has decided to do what the X-files did  at the height of it’s popularity : examine our worst fears (and then make fun of them). And currently human terrorism trumps that of monsters and aliens. Carter still has his finger on the pulse of society and doesn’t shy away from controversy either.

In this (badly written) article the writer accuses Chris Carter of doing  the very thing he wants to critique :inciting hatred.

The usual chestnuts :”killing infidels is not prescribed in the Koran (It is). Most Muslims don’t speak Arabic (a lot of the terrorists sure do). But it appears that the writer has completely misunderstood Carter’s intentions :Carter was not out to criticize Islamophobia, he came to criticize Islamic terrorism. On the Fox network of all places (which is why it was allowed to happen.)

Needless to say, the episode has garnered mostly bad reviews from the politically correct mainstream press.

But who cares if it’s got Mulder line dancing to “Achy breaky heart” and flirting with Scully while philosophizing about the state of the universe?

So word is out that the government is planning to upgrade and replace the old level crossings at Carnegie , Murrumbeena and Hughesdale with a track raised 9 metres and huge concrete eye-sore stations that will hover over these quaint old village-style suburbs like alien spaceships. 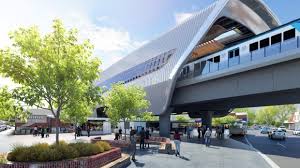 The government did not consult the locals, but pretty much ambushed them with a door-knock 2 days before the official announcement. Understandably, the locals are up in arms and a petition against the “sky rail” containing nearly 3000 signatures has been filed with parliament.

The government also issued a propaganda video , which promises to turn the area under the track into a bike path and parkland, as if people will flock to parks under thundering trains. More likely this will attract the local drug dealers and “painters”.

As a former resident of Murrumbeena (for 10 years), I lived one street removed from the train-line. Even in the late Nineties it was congested and running with greater frequency than other train-lines. We could hear it, but it didn’t intrude on our lives. If the sky rail was built, many people from our street would be able to see it too.

As for the people whose properties back onto the rail (Mainly Murrumbeena)this is obviously a disaster of epic proportions reminiscent of the Blues Brothers scene :”How often does the train go by? So often you don’t notice it anymore” But of course you do!

Instead of   accusing people of NIMBYism, maybe the critics need to understand that this part of Murrumbeena is an upmarket patch with huge and extended 1930ties heritage properties on large land, some of them close, even backing onto the train line. On the nearby Waverley line, which has always been raised in parts, property backyards do not back onto the train line but start across the street.

Murrumbeena and Hughesdale have the feel of old English villages, with masses of trees , beautiful period  houses , and quaint shopping centres that nevertheless cater to all daily needs.

The elephant in the room is really that Melbourne is growing by more than 2% per year, and a lot of the growth is happening in the third world ghettos of Dandenong/Cranbourne, but also in suburbs like Clayton, which has necessitated more frequent trains and therefore congesting the level crossings. On the other hand , it is pretty obvious that those crossings are only used by locals, as most people know to avoid them by going via Caulfield underpass or Oakleigh overpass respectively. Opening up the level crossing will simply bring more traffic into the area and thereby nullifying any anti-congestion and safety  effect from removing the level crossing.

Rather than turning Melbourne into another bullshit soulless Asian inspired city, why not keep our heritage alive ?  We have a million tourists coming from China every year who want to see Australia, not another China. Looking after our heritage is better for the common good in the long run, than catering to the needs of drivers.  Rather than just growing the city without restraint, it’s about time to relocate people to the country or smaller cities, which will improve services on existing lines there.

I ‘m guessing this isn’t going to happen :  governments have been unseated for less.

“A United Nations panel has decided that Julian Assange’s three-and-a-half years in the Ecuadorian embassy amount to “arbitrary detention”, leading his lawyers to call for the Swedish extradition request to be dropped immediately.”

Of course this doesn’t mean that anything will change in the eyes of British and Swedish authorities. He is a middle aged white man after all, and the only legitimate refugees these days are young brown and black Muslim men,whose rape rampages in Sweden and the UK are tolerated and swept under the carpet by authorities, while a white man only has to have consensual sex with the wrong woman in order to be locked away for life.( Of course, the rape charges against Assange have always been irrelevant.)

Ironic, then, that Wikileaks tried to defend the lives of those Muslims by showing how the US committed war crimes.

The US stance towards Assange would be understandable if the US government and it’s president weren’t such lyin’ cheatin’ bastards.

This whole sorry saga is a medieval tale of brutality and miscarriage of justice of epic proportions , but one thing is clear : The West does not have anything resembling freedom of speech or freedom of the press, but is starting to resemble East Germany at the height of Stasi infiltration.

The UN decision, while welcome, appears to be nothing but a cynical exercise in ass covering inspired by Pontius Pilate, paying lip service to the idea of human rights, while at the same time being completely willing to sacrifice yet another enlightened human being who wanted to do good. 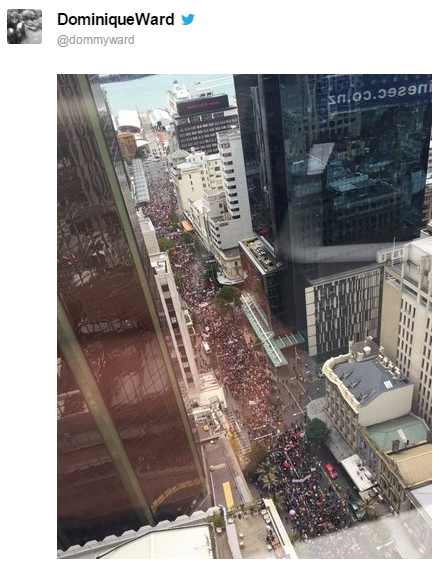 Despite much of Auckland’s CBD being shut down with multiple intersection sit-ins and even the iconic Auckland harbor bridge likewise shut down, John Key signed the TPPA deal locking New Zealand into onerous binding trade agreements.

Most likely this spells the death blow for the struggling New Zealand economy, which some pundits argue never really recovered for the 1987 Wall street stock market crash. New Zealand is another Greece in the making, with multinational corporate vultures already circling the trapped prey.

For New Zealand now the TPPA is law, but for how long will the law be respected in New Zealand?