Assange hung out to dry by the left 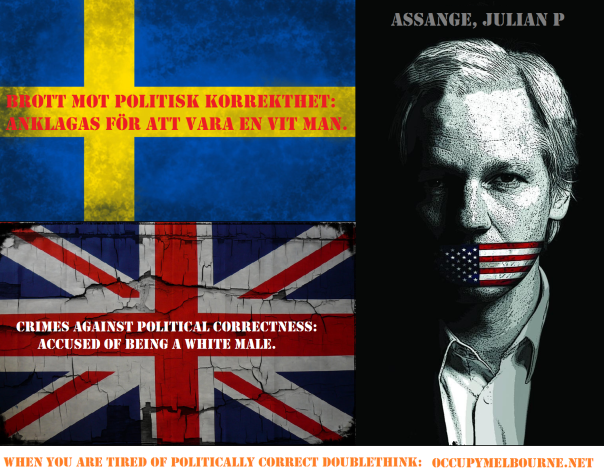 So hanving been sold out by a carefully managed implosion of his wiki leaks party, all over whether preferences were going to go to the left or right, It’s pretty fair to say Assange has been used and discarded by the left for apparently failing one of their claimed moral standards. Sure all the sex allegation stuff was carefully put  in a memory hole while he was hot property, along with he fact he acted like a bit of a heart breaker when women were literally throwing themselves at him. But that’s the left and feminism for you, they love a bad boy and then want to scream a blue murder (or rape) when the sour grapes arrive. I mean he really should have known that being a white male is toxic commodity to leftists and they were primed to drop him like a stone when a small amount of heat came on.

So all this bullshit about principles ( free speech, transparency, political freedom, commitment….) it all goes out the window when the next bandwagon arrives. So what can we do now for Assange?

The Australian government has left him out in the cold, despite the fact they are right now willing to send 50 police and ATSB to war torn Ukraine to look for Australian body parts and stolen luggage, But a living Australian citizen in a friendly country with a politically hot legal hassle, nope.

So apart form beating the drum and producing memes that might get stuck on an Ecuadorean embassy fridge in London, lets look and some overlooked facts about Assange.

I can almost feel a man cringing at a laptop reading and thinking “Oh shit, what’s this gonna be”.

Julian Assange was born on July 3 1971, the same day Jim Morrison died. Strangely there are more connections and similarities.

Morrison was born in a place called Melbourne (Florida) and left in order to study, later becoming a famous counterculture icon. Morrison famously fled the US to Europe (France) escaping a contrived court case.

Assange moved to place called Melbourne (Victoria) to study, later becoming a counterculture icon. Assange famously fled from Europe (Sweden) to the UK to escape a contrived US prosecution.

Both had in common:

Morrison in his later years, even after all that booze and drugs makes a remarkable prediction. (That hair is real)

Assange in his early 40’s showing the prediction is true and having a bit of a giggle. (That is a wig)