A false dichotomy is a logical fallacy ( an illogical argument) which states there are only two option option A or option B. Clearly there are many possible choices for most questions. A perfect example is in every bottle store when one decides which drink one might like to have. If a situation is painted as having only two choices it is possible a false dichotomy is being offered. Given the choice of beer or wine, one might wonder why vodka or whiskey (or anything else) are not being offered. Some times political situations are  deliberately polarized to create the idea of a false dichotomy where such a binary choice is neither real or even helpful.

In Australian politics for a significant period of time the false dichotomy of Liberal(+National) vs Labour(+Green) has been not only offered, but even reinforced by the  STV voting system. The classic response to this has bee the third option the donkey (informal) vote. Of course this is people either disenchanted with politics or not fully understanding the system, but clearly represents an additional option. Funnily enough in the recent Australian senatorial president election there were two donkey votes, clearly they were deliberate as you couldn’t really expect two senators to not know how to vote. Well one donkey vote maybe was possible, but I’m not looking in my rear view mirror at anyone in particular. Sometimes such donkey votes are a protest at the futility of voting against such large voting blocks or even a subtle insult to an expected last place getter.

Sometimes geopolitical situations can be described at a false dichotomy by the puppet masters, particularly if it suits their purposes. Here is the last two ‘world’ wars and the real false dichotomy that was an likely still is in place. Of course if you attack the false dichotomy both sides of the dichotomy will be instructed to attack you, which ironically proves that it is a false dichotomy for all those awake enough to see through the cognitive dissonance. 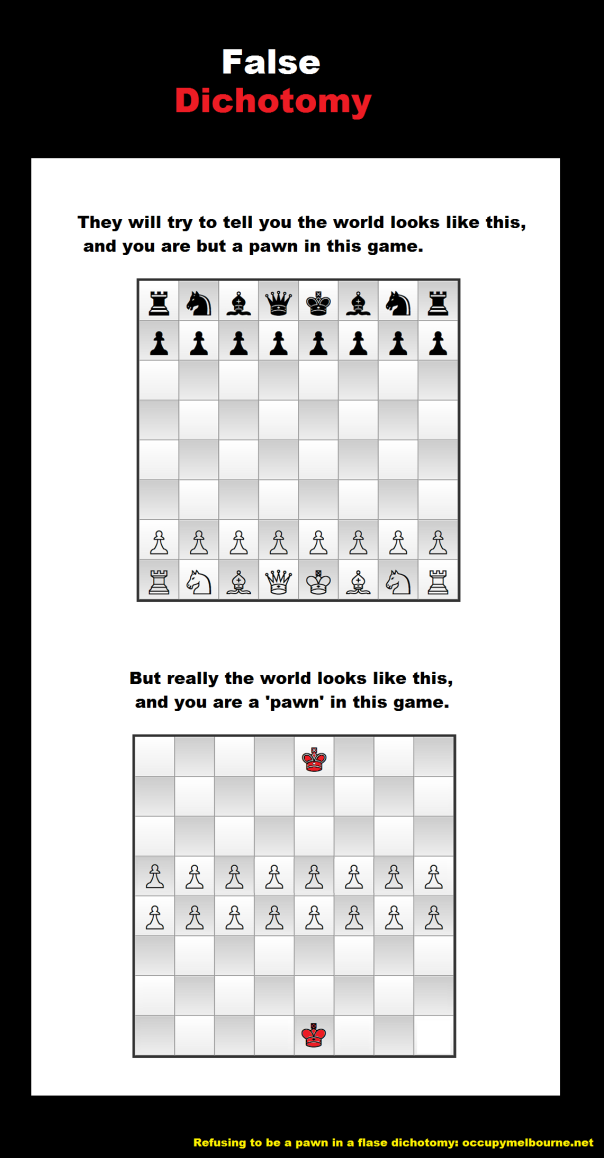 Of course sometimes the situation is so complex that making a dichotomy of it is not possible, though some people will try very hard and often limit and distort information in order to do so.