← Monsanto Protest: Why Walk If You Can Dance?
Work for the dole: UK experiences and analysis →

In a disturbing  turn of events protesters are using elaborate disguises to attempt to appear to be normal members of the community. In a recent incident one man ejected from the glorious prime ministers hallowed chambers had disguised himself as  a priest and had even gone to the extraordinary lengths to have attended seminary school, graduated ,dedicated his life to God and even gained employment in a church and preached to congregations. Protesters are apparently pushing a radical political ideology called ‘Democracy’, which through bizarre convoluted legal smoke and mirrors, they are attempting to claim is part of the Australian political process.

We are seeing elaborate and desperate attempts to subvert the glorious 1000 year plan by the glorious twin visionaries of Abbott and Hockey. A purported man of God should not stoop to impersonating a priest for political means. 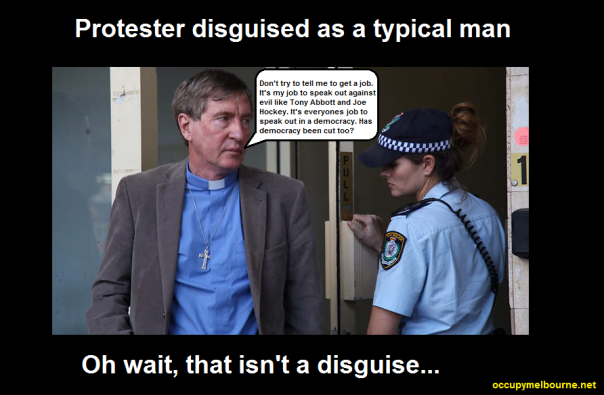 Priest ejected from Tony Abbots office. Tony Abbott has now also banned God. Members of the public are advised to stay at least 100 meters away from Tony Abbott during thunder storms as a safety precaution. Actually avoiding the horrid prick would have been good advice even before this development.

← Monsanto Protest: Why Walk If You Can Dance?
Work for the dole: UK experiences and analysis →