A recent front page of the Murdoch rag Daily Telegraph labels Sydney anti-budget protesters as ferals. I have a feeling that all the professionals, students, families, pensioners and working class people who took part in the protest would have a problem being associated with this term. In 2011 the Herals Sun labelled Occupy Melbourne protesters unwashed hippies and vandals. Of course there IS a hippie/feral element in all protest movements, as people who are alternative and on the cultural fringe are often the first ones to realize what is really going on. 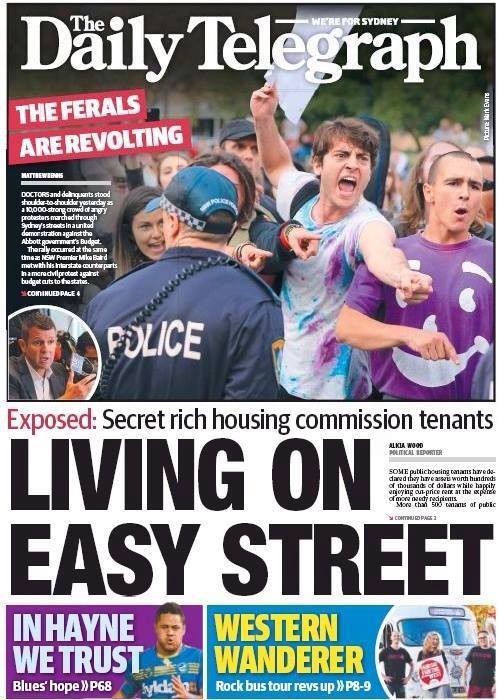 There is nothing really wrong with being a hippie or a “feral” as such, these people serve a function in society too, being kind of like the canary in the coalmine, however, the ultra-conservative Murdoch press uses the label in a derogatory way, in order to discourage” good hardworking” people from associating with protests.

Except good hardworking people have realized now that being “Hard-working” is not that easy these days if there are no jobs and maybe, just maybe, the whole idea of “hardworking =good is a con imposed on the populace by the lazy One Percenters who themselves live off the interest of their wealth , in order to keep people enslaved.

It would also be interesting what the Murdoch press thinks of the eight priests and nuns who recently held a prayer vigil for refugees in Tony Abbot’s office and were kicked out. Those lazy ferals should get a real job!

Also of note is the lower half of that front page, claiming that wealthy people are sponging off the system by living in housing commission flats, but when you look into it, they may have a few hundred thousand dollars in the bank , which may have been an inheritance or similar, not sure they are really wealthy, especially if they have to draw on that money as their main source of income.

The fact is , there can be no full employment in this society. This is mainly due to automation and outsourcing or disability, neither of which are reversible. Therefore we need to look after people who cannnot work for whatever reason and calling them ferals, unwashed hippies and dole-bludgers is simply cynical, mean and stupid. But you would not expect anything less from the Murdoch empire.

Posted on May 21, 2014, in 1Uncategorized. Bookmark the permalink. Leave a comment.