The problem of perception

One of the most difficult problems in trying to explain new things to people is human perception. How do you explain to people what freedom is if they have no idea of what that is. This may sound silly but I’ll attempt to explain how your perception may deceive you as often as it can enlighten you.

For students of psychology and philosophy the following image should be familiar. 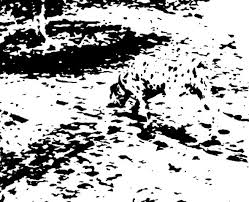 After some time you should be able to see a dog. Some of you may be wondering “Why did it take so long for me to see it?”. It does take a while because you brain must search for patterns and attempt to match up those patterns to ones stored in your brain. You have seen a dog before so eventually you recognize the outline of a dog. Your brain effectively draws a line around what is a dog and marks it as separate form all the blobs that are not a dog. In your mind you know what a dog looks like.  Without this mental image  ( or mental construct) you simply cannot see the dog. Sounds simple enough, until you consider the paradox, if you can’t see the dog until you have a mental image of what a dog looks like, how did you get the mental image in the first place? Sort of like a chicken and egg situation.

It gets even worse when you consider how did you get any mental images or constructs into your brain in the first place? what about hearing, taste, touch.

So now that your brain is a little sore over that concept. we’ll move on a little to when your brain want to see thing that are not there but seem to match a mental image (construct) but it simply can’t be true. 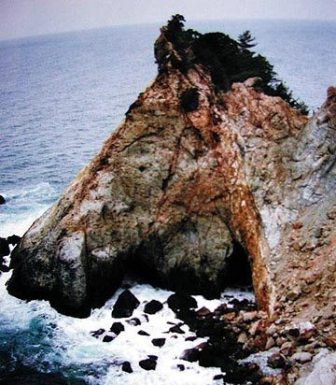 Try not to see the horse.

There is no horse in the picture, but its easy to imagine that there is. So this is now apparently the opposite problem, your brain is compelled to tell you something is there, when on closer inspection it is not.

This leads to another issue we want to see patterns even if they are not there. Sometimes even a vague hint at a pattern send our pattern recognition into overdrive to try to make the rest of the pattern fit the mental image we have, even if it become a stretch in places.

Try covering the face and looking again. Not so convincing now, look at the’ feet’. Some patterns we a greatly drawn to, one is faces, this is called Pareidolia ascribing patterns where the patterns are either random or are not describing what you want to interpret them as. As much as you look it and might want it to be, it is not a woman made of stone.

A relatively common phenomenon from the past is the experience of native people having first contact with Europeans on 16 and 17 century wooden ships. From the accounts of the native people, they did not perceive the huge thing on the ocean as ship, often they were perceived as giant birds. And it was not until the natives actually saw the ships up close they realize they were huge wooden boats. Their mental construct did not allow for boats to be so large.They believed such a boat was not possible and therefore must be something else, a huge bird seemed more likely but equally surprising. For the original people of Australia they perceived white skinned people as undead or ghosts because in their experience the only people with white skin were corpses.

So an entirely possible conversation in Australia at one time could have been this:

Uncle, you have to come to the beach, some undead men climbed off a giant sea bird and offered us stale food.

It’s an omen son, and not a good one.

That was when Australia looked a bit like this.

I’m sure seeing this map is firing a few pattern recognition circuits in your brain, but remember when this map was an accurate guide to peoples and borders, there was no Melbourne or state borders.

Part of this is cognitive dissonance but part is attempting to deal with concepts so new and so alien, the mind struggles.

So sorry for jarring you mind around but hopefully it will help you more clearly understand the ways your own eyes can fool you and why it happens. You may recognize it happening outside the area of visual phenomenon and you’d be right to analyze carefully.

Freedom sounds great, but what does it actually look and feel like? Would you even know if you had it?