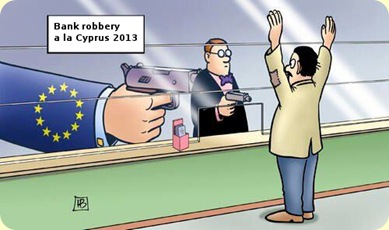 Just weeks after Kevin Rudd was reinstated as PM the Federal government has revealed plans for a  bank depositor tax of 0.05 % on all deposits up to $250,000AUD.

Another tax for everyone except the ultra rich.

Customers of bank are make to insure the bank, not the shareholders.

The bank will have fund to plunder which they will definitely will attempt to get.

The banks are being offered a reward for failure which make banking failure more likely.

The banks have taken secret bailout money in the past and will do so in the future.

How has banking become so thoroughly corrupted that customers are expected to insure the  bank (a business) they are forced to use?

Many of the major banks here in Australia have recorded vast profits in the last few years, why are the shareholders not required to fund this insurance fund?

Why does banking demand such preferential legal treatment system to support them?

So if the Federal government is going to collect money in the form of a tax to insure against banking collapse, where are they going to keep the money, to keep it safe?

Sovereign bonds? Many are not profitable. Most are just as risky as banks.

Big mattress?  Might actually be viable as a  stack of $100 notes in a vault.

Perhaps the people of Australia should put a levy on the  Australian government, in case they fail to uphold the rule of law and the Constitution.

If a bank fails the solution is simple, the shareholders must pay for the losses, after all they took the gains and had their say in the running of the operation.

Do some research, you will find the same multinationals you hear about from the USA , Europe etc are behind the big 4 banks here, and the playbook they are using is largely the same.