Monsanto is a mega corporation which was founded in 1901.
Its key market is the agricultural sector and focused on pesticides and synthetics until around 1983 when they announced that they had successfully genetically modified a plant cell.

Much of Monsanto’s modern marketing has targeted the need to grow food almost anywhere on the planet, it’s quite an exciting idea, cheap crops that can be grown in the most extreme conditions.

Hey if this is true then whats the problem?

There are several issues that come into the spotlight.

Just like many other multi national corporations, Monsanto uses their power to pursue government officials and organisations such as the world trade  organisation and international monetary fund to completely reform trading system to allow access into a market and push out local businesses with often money and resources that lots of countries just don’t have.

Farmers world wide were at the front of the anti-globalisation movement in the late 90s trying to get the world to act on the threat for these mega corporations, the weight that these mega corporations have on local markets often makes it impossible to complete and killing local industry especially organics.

Monsanto is the world’s largest seed company (global market share: 27%) and owns over four fifths of the planet’s genetically modified (GM) seed and is listed as Forbes 16th most innovative company in the world.

People world wide are demanding more answers about what they are being fed and farmers and customers are worried that fair competition and choice is a thing of the past.

On May the 25th people around the world will be protesting in the local cities to raise awareness about Monsanto and our food supplies and protest governments which allow them into local markets and destroy farmers lives.

If you want to help organise the event message us or visit https://www.facebook.com/monsantomarchmelbourne 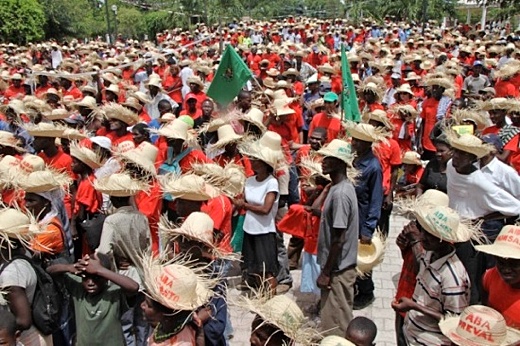 Haitians protest Monsanto seed “contribution”.
Food Sovereignty, Not Agricultural Slavery
As the new earthquake continues to shake, this seemingly benevolent donation of vegetable seeds will forever change the paradigm of Haitian agriculture and thus lead to its further dependence on seeds that poison both the soil they are grown in and the bodies that consume them and that create financial dependency on the biotechnology firm Monsanto. “Our people will never be autonomous if Haiti has to suffer through what is called generosity, but makes us dependent on corporate control in agricultural production,” said Catherine Thélémaque of Action SOS Haiti in Montreal