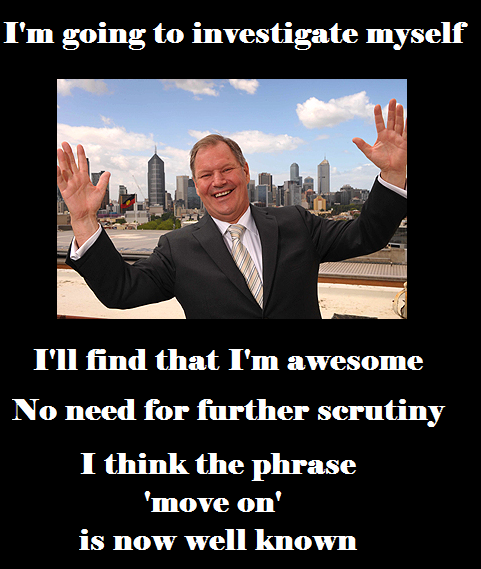 Robert Doyle’s Melbourne City Council is about to discuss the possibility of investigating its involvement in the Occupy Melbourne city square eviction.

My first thought is what a load of crap, investigate yourself? Melbourne City Council still hasn’t cleared up its involvement in ‘Editgate’ cyber war on Occupy Melbourne’s Wikipedia page. That MCC IP Address is still ‘unknown user’. Three weeks and they cant figure out who used their IP address, it’s pretty simple unless you are trying to hide something. This all just smacks of political spin and posturing in a federal election year. All kind of political hacks come out and look for media coverage to get their name into the public psyche and hopefully attached to something populist without actually doing anything useful. Just wannabes looking for a few column inches in the press, because kissing babies is not that fashionable or edgy. Oh yeah the usual suspects, Nick Carson, Carl Scarce and their cronies and the Greens (watermelon) party.

Investigation? There is a federal court case still in limbo, how about we wait for that before a trite self investigation by MCC, or do we wish to color their thinking, like the OM Wikipedia edits.