The Free Shop will pop up today at the Colour Parade in the CBD. It will be at the bottom of Carlton Gardens and open between 3pm and 6pm. 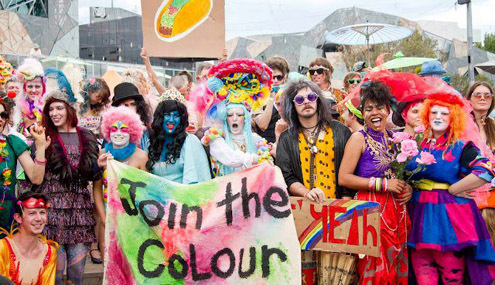 The Colour Parade is set to unleash creativity upon the streets of the Melbourne CBD and invites you to join in! The performance-piece-meets-parade is open to each and every fun-loving individual is all about celebrating spontaneity and imagination. Get together your most creative, quirky and colourful costume and party in randomly selected locations, play games and dance! You have until the end of March to perfect your costume and can check out the website for some inspiration.

Some people are paid by the government to monitor  activist websites to watch for subversive activity. Of course this is pretty boring for those people, So i thought I give them something to do.

Find the hidden message. While you are doing that have a look around the cubicle farm, pretty drab really, another hum drum day. That guy/girl over there you think they might be a bit bored or lonely, maybe they are trying to find the secret message in here too. You could ask them about it, why not discuss it over a coffee. Actually you never really talked to that person much, what are they like deep down? 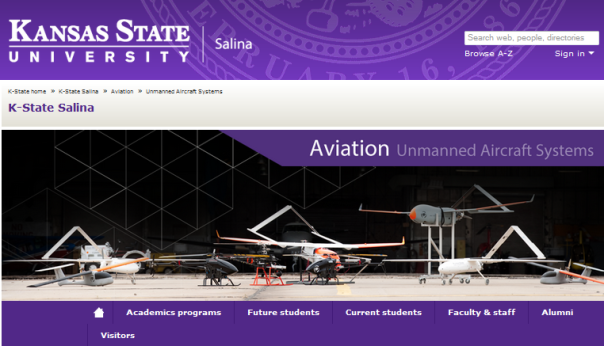 Now you can get a degree as a drone operator, I wonder if it comes with extra training to deal with post traumatic stress disorder?

You’d hardly want to be unqualified to fire missiles at children from a computer screen.

2013- when we were idiots: comedy festival promo

We met a lovely young lady at city square free shop yesterday giving out these flyers. Since her sense of irony and knowledge of the innate stupidity of our current society impressed us, we came to a deal.

If you print out a  Charles Ponzi 5kg Certificate (from the post below) and MENTION THIS WEBSITE and take it along to their walking tour, they will give you for FREE a very strange and confused look and perhaps a wry smile.

They will probably offer you

Just like on the Ponzi certificate it’s not what you say its what you don’t.

Ponzi bucks! print out yours for free here. 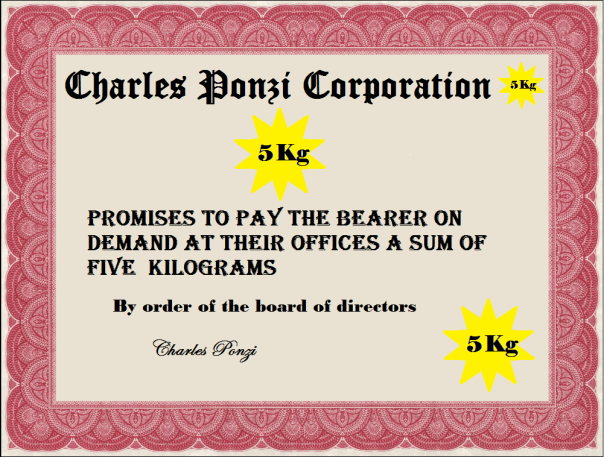 So if some one attempted to pay you with the above certificate you would really be scratching your head. 5 Kg of what you might ask. That is a very good question, so clearly that might be a clue the certificate is worthless, they are promising you nothing essentially. 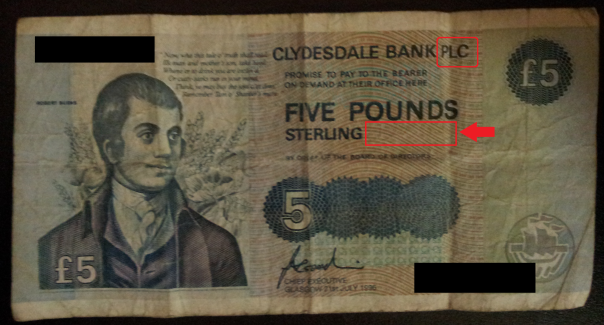 Let’s now look at this certificate with some people today actually accept for value. Once again a private company PLC means publicly listed company, they are promising 5 pounds (0.45kg)  of sterling something. Sterling if you Google it will usually come up with sterling silver (a 92.5%  silver content metal alloy ). However omitting the word silver it means the certificate is actually worth nothing. One day I’d like to knock on their doors and ask for my slab of silver metal, but we all know that will never happen.

Two worthless pieces of paper, the only difference is that one is accepted in exchange for goods and services the other is obviously a joke.

Protective services? The word on the street is… 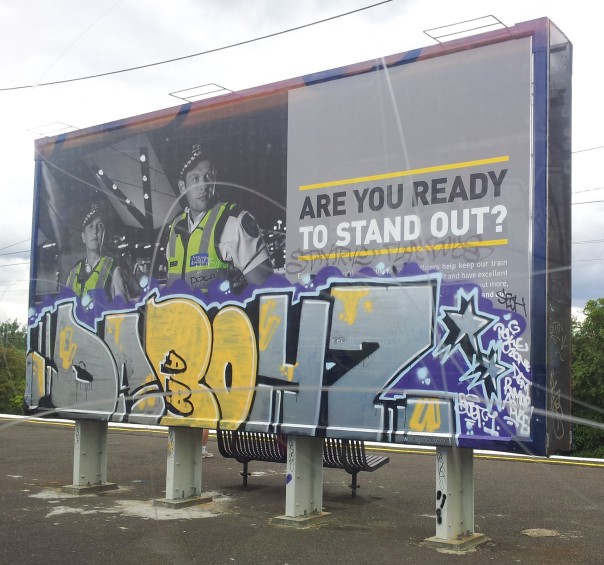 The strange swirling pattern is from the scratched in graffiti on the glass of the train carriage, multiple layers of graffiti (and protective services fail). 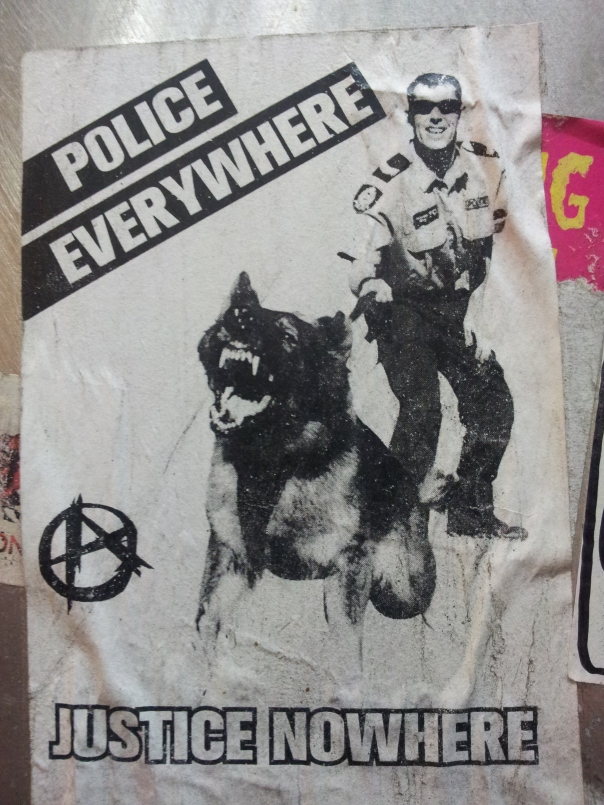 We don’t condone graffiti tagging  or illegal bill posting, but we don’t denounce it either. Some might even consider it free speech or political communication.

Fresh off the Press

Never let it be said that we do not allow our critics to bring their views to the table. Unfortunately almost all of them can’t even work out the simple task of how to use WordPress, so this is an example fresh from the FB jungle.

“Anoun E Moose: i have been through the om.net site and i agree that it offers opinions (many of which are of embarrassingly poor linguistic construction and heaped with libelous assertions) but what it doesn’t offer is a process of critical thinking into the issues it raises or any form of solution based analysis. personally, i wouldn’t touch it with a barge pole because every time i read an article from there i have to go take a shower. admittedly some of the meme’s are somewhat comical but as a credible activist resource out of a rating of 0 to 10 i would rank it as a -1.”

Now, I find this rather interesting, because I share his views somewhat, but my target would be a different one :It’s exactly how I feel about Facebook, which is essentially a sewer of badly worded ad hoc opinions mixed in with often unfounded personal attacks, dressed up with cat memes. Sockpuppet accounts aplenty and misinformation central. Also a government spying tool on those who dare use their real name. After reading Facebook sometimes, I don’t need a shower, I need a blood transfusion and a memory reset.

What some people fail to understand, is that this website often uses controversy and hyperbole mixed with humour to get people thinking, while at the same time adhering to what we believe at the very least approximates the truth. A bit like an like an online “Chaser”, we take the piss but we do not publish lies.

In addition we try our best to avoid pseudo intellectual analysis and politically correct language, which all too often make a mockery of the human experience.

There were so many photos taken yesterday at the Free Shop, as it was a bumper day . The crowds were enormous thanks to the Comedy festival in celebration of our Lord’s crucifiction. Clearly our society has lost it’s way completely, but at least I ate some fish for dinner. Anyway, it was great fun, […]

Must-read article from the Rolling Stone about the high number of leakers, hackers and activists imprisoned in America while, CIA torturers , government murderers and robber banksters go free. Usually articles in Rolling Stone are quite long and complex , this one is more concise. It seems that Bradley Manning is only the tip of the iceberg. Of course they really want to get their hands on the king of hacktivists, Julian Assange. 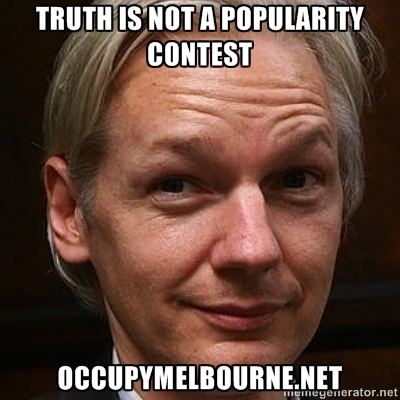