← Documentary > The One Percent
Where does money come from? →

UPDATE: Tecoma vs McDonalds wil be on the 7.30report tonight, on ABC1

“Paediatrician Dr Joel Freeman personally removing the NO MACCA’S orange ribbon sign from the garden fence this morning. Police officers from 4 separate stations came on his demand to demolish a beautiful garden built by the community and evict ONE peaceful protester. What an extreme waste of tax money and resources. We loved our garden but do not need it to keep up the objection to this pox on our town. McDONALD’s!! We are strong and we will not give up!!!!!”

“This Morning Paediatrician Dr Joel Freeman came to town. Closed off the garden, believing it will shut us down. Police packed up the garden and then stood back and supervised as Freeman moved through the crowd desperately wishing to agitate and aggravate, unsuccessfully. Police stood back, some shaking their heads in disbelief at the scenario, some even sharing stories with protesters of how much they resent neglecting their obligation to the Hills on account of regularly being called down to Macca’s FTG to deal with anti social behavior, drunk, disorderly and drug affected customer, fights, and dangerous driving in the car parks and streets. They don’t want it either.”

From “No McDonalds in the Dandenong Ranges” Facebook Page 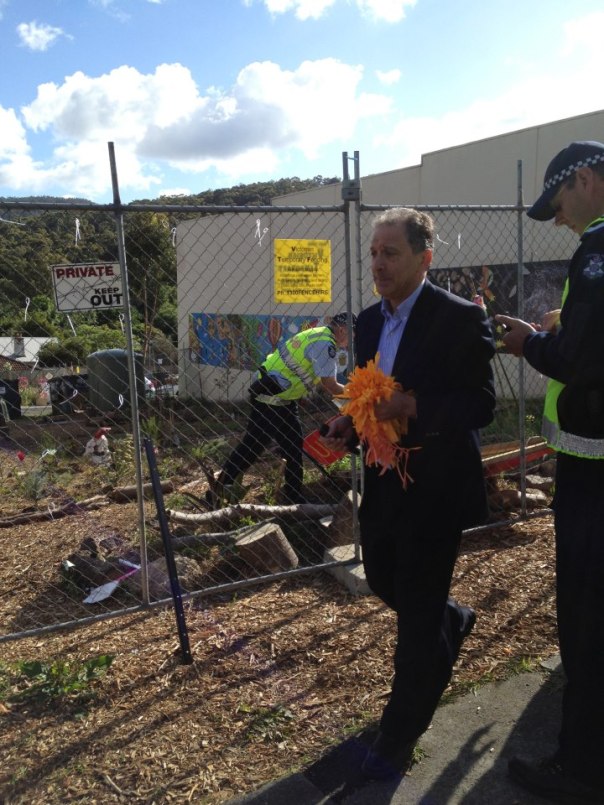 Posted on November 9, 2012, in Tecoma. Bookmark the permalink. Leave a comment.

← Documentary > The One Percent
Where does money come from? →